Skip to content
Today is our 25th anniversary (married 3/30/1995).
It was a cold, cloudy Thursday.
We got married at the Ford County Court House in Dodge City, Kansas . . .
. . . and the ceremony was performed by Judge Daniel Love.
(Heh-heh. I always thought that was kinda cool.)
The judge’s two secretaries were our witnesses.
We actually wanted to get married on April 1st, but it fell on a Saturday that year, so we opted for the first previous round number day.
This is our favorite photo of us, taken in October 2006 when I’d asked the kids to do family portraits . . . 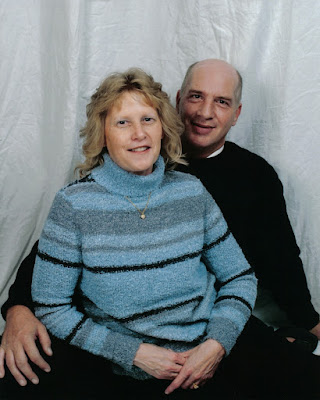 We look quite a bit older and more life-worn now, haha.

The necklace I’m wearing in the photo was a gift from my sons that they’d bought at their elementary school’s annual book and gift fair in 1988, then gave to me for Christmas that year. The necklace was buried with my son Jeff in his grave in 2013.

We’ve spent at least half of our anniversaries in the hospital due to one or another of Jerry’s medical issues.

Jerry and I are doing the usual, just spending the day at home in the peace and quiet. Unlike most people, we’ve never celebrated by going out. (We don’t do anything on birthdays either, so this is normal for us.)

Jerry was the first (and only) person to ever buy me a dozen red roses.

I boo-hooed, of course.

We were best-friends before we ever married. I cannot imagine life without him now.

We’d always planned on renewing our vows on our twenty-fifth anniversay, but, well . . . the virus has hindered a lot of things right now.

Hope all of you are staying safe and well. Please take care of yourselves!