Skip to content
Just a few days ago I was wondering where I was going to find any extra time.
It would seem that the problem of finding time has been solved . .  in a round-about way, that is.
“. . . due to coronavirus concerns.”
Churches are canceling their services and moving worship online (if they have that capability).
Schools are closed this week, which makes an extra week of Spring break, because that’s what the last week of March would be anyway.
Restaurants are closing their in-house eating areas and only providing drive-thru service.
Most public spaces like theatres, museums, sports complexes, auditoriums, and the like have just plain closed. The NJCAA basketball tournaments will not be held this year in our town (yes, it’s here that they do that).
City and county offices and the court house are off limts to all but the most essential personnel. It’s the same for medical clinics, the hospital, senior centers, nursing facilities, and funeral homes.
Boy, it’s sure quiet around here.
*crickets*
And now I have nothing but time.
Because Jerry and I are in the very high risk group, our doctor advised us last week to completely avoid groups of people and all social spaces.
Happy to do it, thanks doc!

No, that is not sarcasm. I really mean it.

Because our town has gone plum nuts!

I had another unforeseen doctor appointment on Thursday last week (will explain in a bit). On my way home afterward I stopped at Walmart to get a couple things. I’m pretty sure you know what I’m going to say next . . .

I was flabbergasted when I got out of the car at Walmart. People were coming out in droves with shopping carts — some using 2 or even 3 carts! — piled high with disposable diapers, toilet tissue, cleaning supplies, and food, food, food!

I left without my two items because the shelves they should have been on were absolutely empty.

I tried at two more stores that were on my route home.

By the time I walked into the apartment I was completely disgusted with people.

But whatdya do, right? I’m not responsible for their actions. But they sure have made it hard on those of us with lesser means.

Ah, well. At least I have time to do some things now.

John and Elissa made an announcement a couple weeks ago in their usual creative way . . . 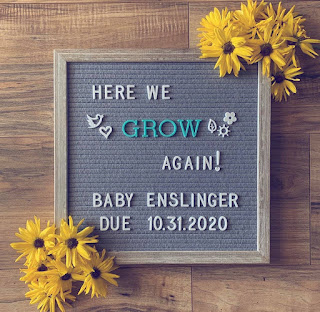 Another grandbaby for us! Woot! Woot!

Oddly enough, granddaughter Nova (age 4 1/2) had pointed to Elissa’s belly — a week before Elissa even thought about having the blood test done — and said, “There’s a baby in there.” And also several days before her blood test, I’d gone to their house for something, and standing near Elissa, I had a very vivid sensation that she was pregnant. It wasn’t until after the blood test and John told us that I found out what Nova had said. Wow.

John was sneaky . . . well, it was actually Elissa’s idea.

We were getting ready to leave their house after babysitting Aero when I asked John how their house hunting was going. He said they’d decided to stay put and make their little house work (which I was relieved to hear, because they’d been looking at such expensives houses!). They’d bought a couple new area rugs, a dishwasher, a new ceiling fan and light for Nova’s room, a big boy mattress for Aero, and had a dresser ordered for the kids to share.

Then John said, “We want to try to get Aero weaned into his own bed, so we’re going to have him and Nova share her room. We want to make this house work, so we have plans to get a few things changed around here to make it easier for Elissa by the time the baby starts showing.”

I blinked and looked over at Jerry, then back to John.

Baby Enslinger is due on Halloween . . that’s really just a few months’ time.

My right eye continues to give me problems, including an increasing difficulty in focusing and seeing clearly. Nothing I can do about it except pray.

I had to go see my doctor about a synovial cyst on my left thumb IP joint. The pain in that joint has been building up ever since late last summer when I felt an awful zing!  go through it as I was gardening. I was keeping it covered because the area was growing quite large and every little bump was excruciating. It suddenly began oozing, so I let my doctor know and he had me come in right away.

Doctor says it’s related to my osteoarthritis. The cyst is usually connected to the joint by a fluid-filled canal and only surgery to remove it is a sure remedy. He said they could aspirate it, but it was already oozing on its own. But really, there’s not much we can do since I have no insurance. Sooooo . . . it stays with me. It hurts like the dickens, but has finally oozed out, and is closed for the time being. I just have to watch it for infection.

Bleah. I’m just taking time to keep it covered (haha) in prayer, too.

I bet you don’t have a traffic jam in your closet! 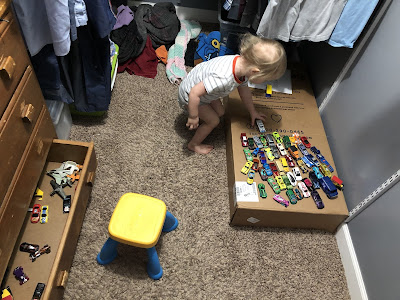 That’s John and Elissa’s closet. All the Hot Wheels (and other brands) vehicles they’ve bought for Aero and the ones I collected for several years, are in the bottom dresser drawer. John and Aero play with the cars in the closet while Elissa reads a bedtime story to Nova. Those photos were taken the other day when Aero just would not take an afternoon nap. To keep him quiet so Nova could sleep, he and I played with the cars. He lined all of them up by himself and made car noises the whole time.

By the way, that dresser was built by my dad for my brother when we were very young (in the mid-1960s). When my brother moved to Wichita as an adult, I took it and refinished it so Jeff and John could use it in their bedroom. When they both moved out of the nest, I began using it as extra storage. And for a while now, it’s been back with John.

It’s been put through a lot of different uses, some of it pretty rough. I’m amazed it’s lasted such a long time.

As we go through this season of uncertainty, take time to remember these words:

“For God hath not given us the spirit of fear;
but of power, and of love, and of a sound mind.”
2 Timothy 1:7
Pray for the people affected, their families, and the medical community doing their best to contain and stop the virus spread. Keep your your eyes on the throne of grace and be the community that people need.
Be like Jesus.
Blessings to all of you. ❤️