It started moving in Sunday night . . . 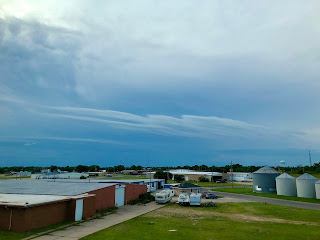 Since yesterday morning we’ve had on and off showers and thunderstorms. Our area is in a flash flood watch through next weekend. We could possibly get 3-6 inches of rain by the time it’s all over. 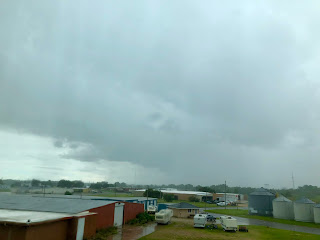 When I sent son, John, a text yesterday morning about it, he commented that he should probably get the lawn mowed before it started. I said, yeah, since some of the grass way out by the back fence was taller than his two year old son. 😆 So, I went over to watch Aero so he could get it mowed (Elissa was at work).
We’re so thankful for this rain! 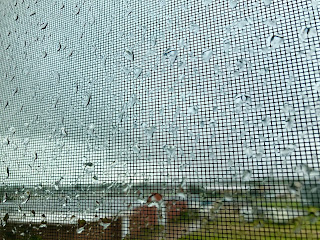 As I was taking these photos, I thought about that big red-brick building you can see there on the left. It used to be Riverside Lanes Bowling Alley. It was one of the two local bowling alleys I would frequent with my friends during my high school years in 1973-1975. Riverside looked like this back in the day . . . 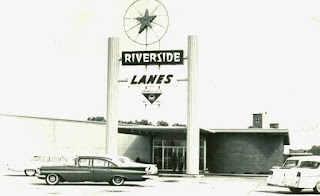 Yeah, that photo is a little before my time spent there lol. It went out of business decades ago. Now it looks like this . . . 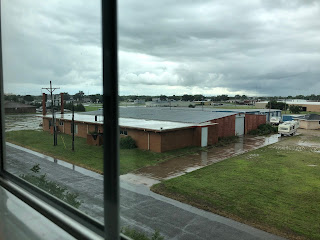 The inside was gutted and is now used for storing recreational vehicles, boats, and fancy cars. Behind it are the blue and white Stop-n-Stor storage rental units and the area where the guy that rents them out works on people’s RVs and boats (you can see a couple sitting there on the right).
The other local bowling alley was on the northeast side of the city and was called Countryside Lanes Bowling Alley (back when the city limits and country met right there, and before all the area north and east of that filled up with housing). Here’s what it looked like back in its early years, (this photo was probably about 1980) . . . 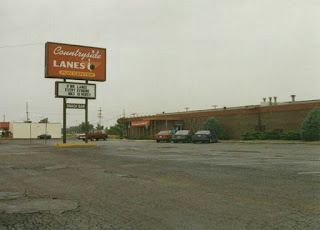 Countryside is the one I went to most. It’s where I learned how to play a pretty mean game of pool. I can’t remember exactly when it went out of business. I know it was still open when my boys were little in the early- to mid-1980s. My ex and I went there to play pool sometimes with a couple friends.
In 2012, our church bought the Countryside Lanes building, and in 2014 it moved there! I couldn’t find a photo of the front of the building after all the work was finished, but these next couple will give you enough view to know how it changed. The first is from right before it was completed (credit: Crosspoint Church). 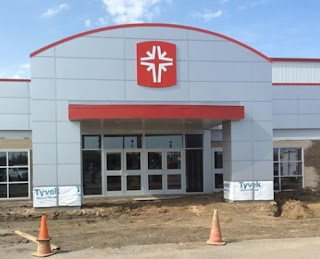 This second I took on March 2, 2016 at sunset as we were all going in for Wednesday night Bible study. It was glorious! 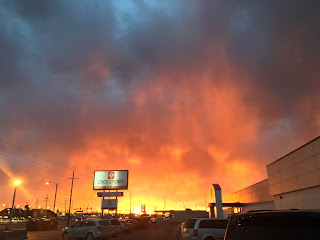 We talk about Jesus and yell HALLELUJAH! when people get saved in a former bowling alley building!

After not having a bowling alley for many years, The Alley was built in 2015 (according to the county property data website) in a more centralized location. I have yet to step inside to see what it’s like, but the older grandkids say it’s pretty cool.

Prayer request: Please pray for my daughter-in-law Amanda. She went to the doctor yesterday because she hasn’t been feeling well. She hopes it’s just one of her sinus infections, but said it feels different this time. They’ve tested her for the virus, but it’ll be 7 or more days til the results come back. She is the head dietary over all the schools in our district, so she’s around all those kitchen workers every day. They’ve been doing the free meals for the kids all summer so they wouldn’t go hungry.
Everyone stay safe and well!

0 thoughts on “Rain, bowling alleys, a church, and a prayer request”