Skip to content
No word on Amanda’s test results yet. She’s just resting and staying away from everyone else in the house. James (her fiance) is staying downstairs for the most part because of his health issues — 3 go-rounds of cancer in recent years, the chemotherapy ruined his liver and kidneys, and he also has a pacemaker because of it — so Amanda’s trying to keep him safe. James has an esophogeal/stomach scope appointment coming up August 18; he’s been vomiting for weeks and has lost a lot of weight. The doctors thought it was his gallbladder, but now they don’t know what’s going on. Please keep Amanda and James in prayer.
These yellow gladioli I bought Elissa for her garden (because that’s her favorite color) just started blooming last week . . . 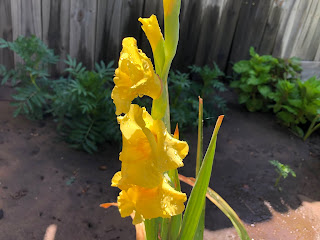 The plants in the background will be large orange marigolds (left) and orange, red, and/or purple celosia (right) from my seed collections. The marigolds and celosia have been growing to 4-5 foot heights in recent years! Everything has taken so long this year to either bloom or produce. Even regional farmers have had trouble. So much heat in the 90s and 100s since the beginning of May has really caused a lot of problems. The zucchini began producing mid-July. John and Elissa often forget to check them and then they grow a bit large lol. This one was 18″ long. 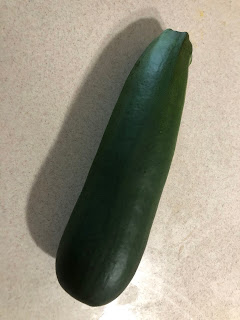 There have only been four cucumbers so far. When I find them, I let John know whereabouts they are so he can let the grandkids pick them. I think I told you back when we put in the garden that I planted the cucumbers at the feet of the corn (“three sisters planting“). This has worked very well. I watch for the growing vines and entwine them around the corn; this keeps them off the ground and the two plants work well together with nutrients and staving off pests. 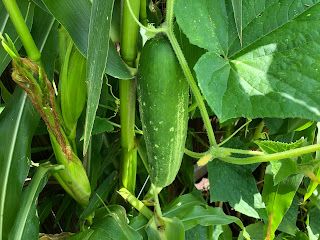 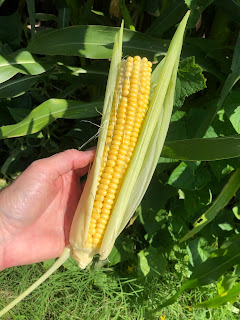 The basil, of course, is growing great! If nothing else grows in my garden, I can always depend on basil lol. Since we had the rains this week, the temperatures have gone down 10-20 degrees! When I got up this morning and checked the weather app it said 63 degrees!
I decided for that nice of a temperature, and the ground being soft from the rain, that I’d get some weeding done in the garden. Being so hot for so long, none of us had felt like pulling weeds/grass and things had gotten waaaaay out of hand. I got half of the garden cleaned up. I ran across the usual worms, spiders, roly-polies, and such. A  baby praying mantis. A couple baby grasshoppers. John was home (he has Fridays off) and came out at one point to see how it was going. He pointed behind me and said, “Look at that dude!” It was a huuuuuuge wolf spider! Made me kinda wonder if it would pick me up and take off with me, it was so big lol. He was probably giving me the evil eye since I took away his hidey place with all the good insects he was eating.
I did find out the snacking peppers are finally producing. Nova and Aero will really love picking those once they turn orange and red. If you haven’t tried snacking peppers, they’re so good and sweet. These plants are from seeds I’ve saved over the years from the leftover snacking peppers Amanda has given me from school veggies. 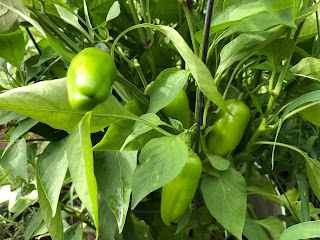 That’s how I’ve started a lot of plants ever since my parents taught me and my brother how to garden when we were little. I’ve saved seeds from store-bought veggies and fruits for decades. I have descendant seeds from the flowers my mama planted when I was little. The daylilies at the house I grew up in (which is the house my dad left to my son Jeff who died in 2013 and that Amanda still lives in with James and the granddaughters), are still growing strong. They are the “Autumn Red” my mama planted the Spring of 1962 when we moved into that house (I was five years old). I stood there watching her plant those first few daylilies. 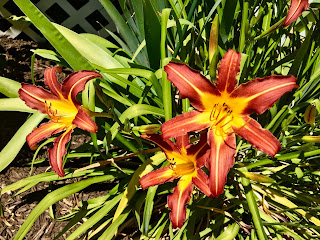 Everywhere I’ve lived, I’ve taken transplants of those daylilies. There are some in Dodge City, Wichita, Newton, and a couple places here in Hutchinson. I need to get some over to Elissa’s gardens for them to enjoy.

Well, that’s it for July, isn’t it? My dad always said that, as he got older, it seemed time was going by faster and faster. I understand that myself, now.

Praying we all have a better August and rest of the year. Blessings to everyone!

0 thoughts on “Some garden stuff and a prayer request”