Skip to content
I do a lot of sewing. My family would emphasize that to be   A   L O T   !
My mama taught me how to sew when I was nine years old.

I don’t have a photo of my mama’s Singer, but I know it was a 1948 and it came with a table. This photo is exactly like the machine and table she had. 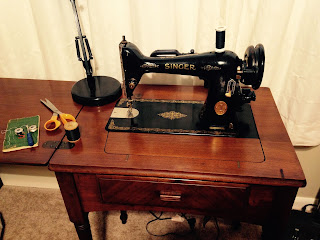 As far as I’m concerned, there has never been a better sewing machine than the old vintage Singers. I wish I still had her machine, but dad sold it a few years after mama died. Her mother – my grandma Dessenberger – had one of the original Singer treadle sewing machines. One time she opened it up for me to look at and I thought it was the coolest thing ever.

Mama started me off making clothes for my Barbie dolls. Yep, pretty intricate stuff for a girl’s first sewing project. But I did it. And I loved it. My Barbie dolls never had one of those moments of “I don’t have a thing to wear!” LOL! My passion for sewing multiplied a thousand times from there.

I remember mama making all our clothes and a ton of other projects. She also knitted and crocheted. I have the original chicken door-stop she made. I bet some of you remember these, or even made one. There is a half-brick in the bottom of the chicken so that it’s heavy enough to make an open door stay put. But I don’t use it for that . . . he sits proudly on the top shelf of my baker’s rack. 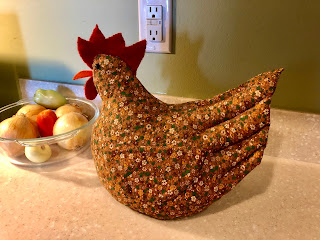 Teaching me to sew over the years, mama was extremely patient. If I didn’t understand something, she went over it as often as needed until I got it.

When I entered junior high, girls were required to take home economics courses, one of them being sewing, of course. Mrs. Brown taught those classes. I thought she was pretty nice and got along well with her.

One day, as we were all pinning our first project patterns (a simple dress) to our fabrics, Mrs. Brown was walking by my table and stopped. She looked at my pinning and said, “Not going to let it get away, are you?” I looked down and realized I was using pins like my mama did, placing them about every 4-5 inches. I guess she thought that was a lot. Ha!

Another day, further along in the progress of our sewing, I was doing some sort of sewing — don’t remember exactly what at that point. Mrs. Brown asked about it and I replied that I was just doing it like my mama had taught me.

Oooohh, Mrs. Brown got all huffy and said, “We don’t do it like your mother, we do it how we are taught in this class!”

Wow. What the heck? I know none of us remembered her teaching whatever it was because several of the girls came up to me later and said so. And you know what they did?

The next class time they all did it my mama’s way in front of Mrs. Brown.

When she said something about it, the girl in the class who was normally a trouble-maker in school anyway, popped off and said, “You didn’t teach us no other way so we’re doing it this way.”

I guess Mrs. Brown decided to let it go because she didn’t say one word after that about anything.

And I still received an A+ on that project. Heh-heh.

I have a photo of me in that dress (in an album buried in a storage tub in the closet) that mama took because she was so proud of my work and grade.

Mama also did a lot of quilting. She’d made the wedding ring pattern quilt for her and dad’s bed, a Sunbonnet Sue for my bed, and a western-themed quilt for my brother’s bed. Unfortunately, none of these quilts are around any longer. Quilting was one thing mama didn’t have enough time to get around to teaching me because she died of cancer when I was fourteen.

I’ve made a lot of things over the years, much of it for other family members. Our clothes, the babies’ and kids’ clothes, curtains, wedding dresses, bridesmaid desses, table linens, bed linens, pillows, all sorts of odds and ends projects over the years. Good golly, I can’t even remember all the things I’ve made.

But I had never tried to make a quilt.

We’d bought a tiny crooked little house that needed a lot of work — it was five houses from Sand Creek in Newton on a quiet dead-end street. We’ve always called it “the crick house.” (Yep, Kansas slang.) This photo is when we first moved in. 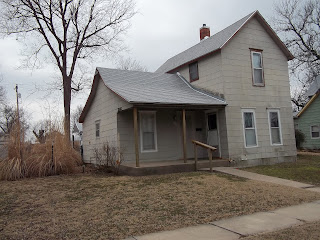 It doesn’t look like much, and it was really run down, but we fixed it up and made it work. We lived there until May 2013. We loved that house and miss it so much even to this day. The back yard was huuuuuuuuge. Perfect for big gardens and lots of fun when the first set of grandkids began spending weekends with us.

We painted the upstairs bedroom “ice blue” and I accented it with white and dark blue curtains and other things of those colors. But the whole room was missing something. And then, I had the idea.

I was going to teach myself how to make a quilt for our bed!

I scoured the internet for two weeks looking at quilting patterns. The original website where I found the quilt block I wanted to use is long gone, but I eventually settled on an eight-pointed star. I remember halfway through my work on it, I took it down to Wichita so I could show my [step]mom and [step]grandmother. When I showed it to my [step]grandmother she said, “Oh my! You certainly chose a hard one to start with!” I hadn’t thought it was hard at all — it was just fun! LOL! I finished it within a couple weeks. It fit perfectly on our double-bed.

I took these photos a couple months ago when I decided to finally put it away for memory-keeping. It’s ratty with years and years of wear and washing and re-sewing. The light blue calico matched the ice blue paint of those bedroom walls and the dark blue everything else in the room. Most of it was machine sewn, but the edging was all by hand-needle sewing. 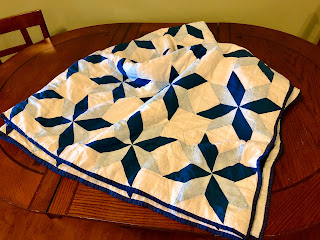 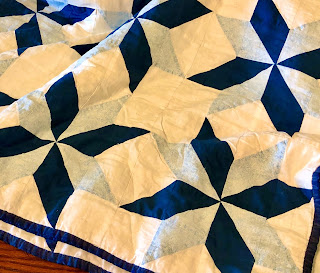 We long ago went to twin beds for each of us because of the sleeping issues we each have. Gives me a good excuse to think about maybe making us each a new quilt, wouldn’t you agree?

And I have a couple more photos yet to show you.

My [step]mom found out a few days before Christmas 2011 that her cancer was back (the same cancer my mama died of in 1971); she was given 2-4 months to live, but barely had two. Shortly after the new year started in 2012, she and my dad had me come down one day to the nursing facility where they were to talk about some things. Which turned out to be a lot of hard things, of course. They still had their house in Wichita and a lot of what we talked about pertained to that, and also making me DPOA for my dad because he would be moving into the facility to be with mom. But during that conversation, my dad said that he wanted me to be sure to get two quilts from the guest bedroom downstairs at the house. He said they were wrapped up in paper in the bottom of a chest of drawers and were made by my grandma Buller (his mother). I assured him I would, and an couple days later, I went down to start working on getting things taken care of at their house so it could eventually be sold.

I’d known that my grandma Buller sewed and quilted. I can remember the quilts on her big feather bed upstairs at her house that all us cousins loved jumping on (and getting in trouble for doing lol). This is my grandma Maria (Ratzlaff) Buller about 1946 . . . 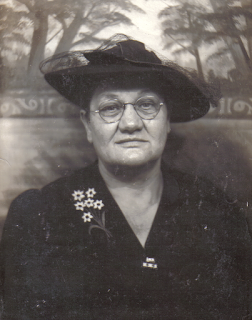 What I found were two quilts that were practically in mint condition (is that right to say for quilts never or just barely used?). Look at these! 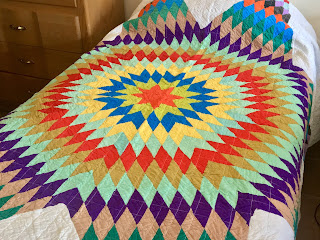 Can you imagine how long this must have taken her — for either of them?! I don’t think I would have had the patience to do all these diamond shapes in this sunburst quilt! 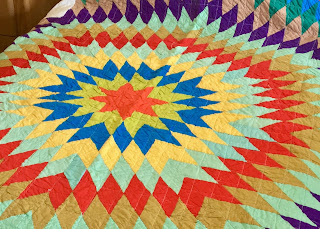 This next one is my absolute favorite! I love the calico prints she chose. I’ve often wondered if any of the fabrics in either of these quilts came from someone’s clothes. 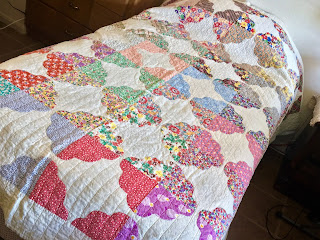 Both of these quilts are mostly machine sewn (on the treadle sewing machine she had just like my other grandma’s), but there is some hand-needle sewing in there, its’ just hard to see unless you can look at it in person. 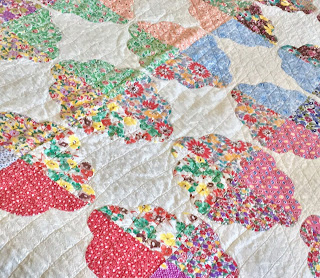 I love these quilts. They are such treasures! For the time being they’re wrapped up and stored in our closet. They both measure about 108″ x 108″ … too big for our twin beds, and besides they’re quit heavy and bulky. Eventually, they’ll probably go to the kids.

I have a few other smaller quilting projects I’ve done, one is in use (on the couch), the rest are put away for when grandkids are here overnight. I have one particular heart pattern quilt I never finished. I’ll have to dig it out and look it over to see what I want to do with it.

No word on Amanda’s test results yet, but she’s resting and trying to stay away from everyone else over there in her house.

Oh! And granddaughter Madison got her first job! (She’s 16.) She started work at Hobby Lobby this past Monday.

Everyone stay well and be blessed!

0 thoughts on “The ones who sew and quilt”