Skip to content
Good news! Amazingly – praise the Lord! – not one other child or staff or other person in the day care virus episode has become sick! The grandkids are well, John and Elissa are well…. and yes, we are well. That whole thing could have easily turned out very bad for a lot of people. Thank you for your prayers throughout this time!
I know Elissa will be glad to get back to work, although she greatly enjoyed the undivided time with Nova and Aero . . . but their income took a huge hit since she had to stay home with them. It had to be unpaid leave because neither of the kids were actually sick. And even though she was only off the one week, that counted as her whole 80 hours off for COVID leave regardless. They told her it was all or none. So, if any of them do get the virus at any time in the future, tough luck. It wouldn’t have been so bad, but they couldn’t allow me to watch the kids because they were concerned with keeping me and Jerry safe and well.
(By the way, if you’re asking why it was only one week, it’s because the whole thing with the other day care had already been going on unbeknownst to everyone for a week anyway, so that counted as the first week. Hard to understand but I’m sure you get the drift.)
We had a few sprinkles today, not enough to make any difference, but the cooler air was so nice that we’ve had the windows open all day. We’re both so claustrophobic that we just about climb the walls during winter when we’re stuck indoors. So every opportunity we get, the two windows in our apartment are open, even sometimes in hot weather. We just turn on the box fans we have for air movement and we’re happy. Of course, with the highest heat and humidity days, we do turn on the air-conditioning.

This past Monday, we opened a new Monopoly game (the 2008 copyright version) that was still wrapped in the plastic. My [step]mom had bought it in 2009 and gave it to us thinking we could use it, but at the time we were still using the one my parents had bought when I was in elementary school so I put the new one away. Well, at some point, mine disappeared, probably in a move, and we didn’t play Monopoly for several years. Until Jerry asked about this one on Monday. I had avoided opening it for whatever reason, but decided it wasn’t doing any good just sitting in the bottom of the china hutch and pulled it out. 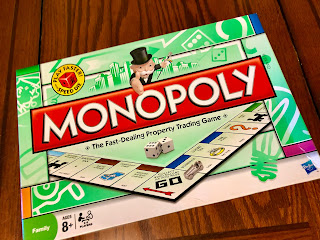 The first thing in the box was the game board. There was this big square of something right there on top that confused me. I had no idea they’d made it bigger and designed it to fold into fourths. 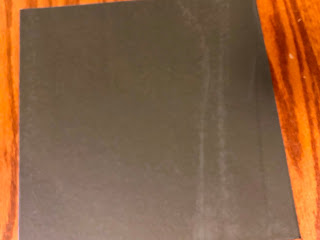 That makes it a much bigger playing board. And the printing was more readable. Better for older eyes! 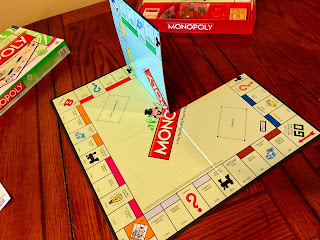 The token pieces for this version are the same as we’d always used. (Yes, I know they have all new versions and types nowadays.) Jerry has always used the car and I’ve used either the Scottie or the wheelbarrow. 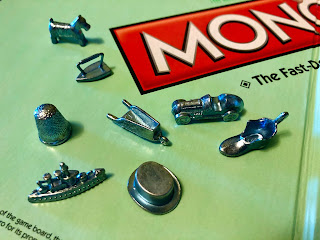 We played for nearly two hours. It was so much fun to play again. Growing up, my brother and I were always so evenly matched, but he usually won. Jerry and I are pretty close-matched, too, but this time, something new happened for me.
I was able to buy both Boardwalk and Park Place! I’ve never been able to do that before . . . ever! 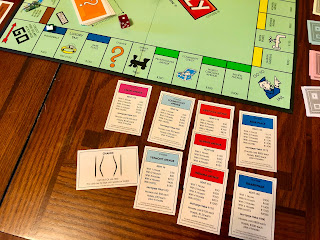 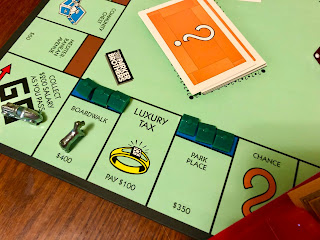 And hotels. No photo of the hotels because I was so excited and we were really into the game. In the end, Jerry had mortgaged everything he had to try to keep up and to pay me, but alas, he lost. He added up all my money and property. Not bad for a couple hours. Ha! 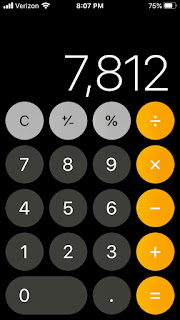 Lastly, I wanted to show you this photo of a recent sunset – well, July 28 to be exact. I was lying in bed reading a book and for some reason glanced toward the window. I saw this sunet of beautiful colors . . . and from my view, the electrical poles crossed like that sort of reminded me of the cross that Jesus hung on. I just thought it was kinda cool and the sky was so interesting.

Everyone stay well and have a blessed weekend!

0 thoughts on “Good news and other things”