Skip to content
Our main water tower is getting a face lift.
For many years, it was a plain drab white with the city’s name on it. 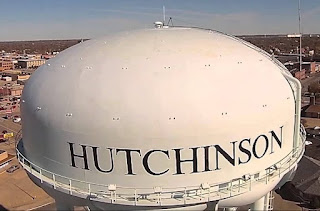 Yes, I know, I know . . . it says Hutchinson, and some of you know we live in South Hutchinson. Just as many other people do, regardless of my actual address, I will always say I live in Hutchinson and call it my hometown because it’s where I’ve lived most of my life.

I can’t find the exact date of the water tower’s next design (or a photo of it, unfortunately), but I believe it was in the late 1980s or in the 1990s that it was repainted with the city’s name and “Come Share Our Space.”  This was a reference to the newly expanded Cosmosphere – Science Education and Space Museum (go to this page and scroll down halfway to read about its founding.)

A side note of interest (maybe to no one but me lol): I grew up just over a block west of the Cosmosphere (in the house I had my dad leave to my son, Jeff, because I didn’t want it and that my daughter-in-law, Amanda, owns now as Jeff’s widow). The Cosmosphere was originally a planetarium (that began in 1962 on the State Fair grounds in the poultry building). All through elementary school (a block south from where we lived), our classes took field trips to the planetarium every Spring. Fun fact: The mummy of King Tutankhamun happened to be there on display the very first time our school went on a field trip to the planetarium! I can still see it quite clearly in my mind. It was fascinating!

From our apartment windows, which face north, we can see the water tower and other city landmarks (we can see more in winter when the trees are bare, but I much prefer the trees full and green). We knew the city was getting ready to begin this project but hadn’t heard when. Then, about ten days ago, I suddenly noticed there was dark blue showing up on it. Normal view is first, then zoomed. The water tower is pretty much exact center in the first one. 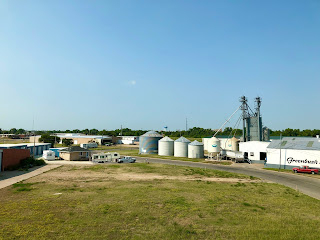 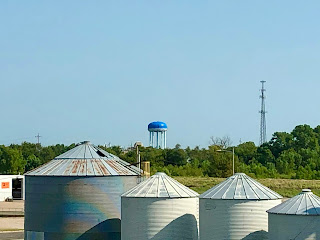 I have to say that, at first, I really didn’t much care about the painting of the water tower. G&L Tank Sandblasting & Coatings LLC from Shelbyville, Tennessee is doing the work at a cost of $347,300. Because Jerry used to work for a professional residential, commercial, and industrial painting company, I understand about the costs involved. But my orignal thoughts were that our city could be using that money in better ways. I mean, it’s just a water tower.

As the days went by, I began hearing folks talking here and there about how interesting it is to watch the day-to-day progress. Parents who are homeschooling are using it as a learning experience. Many people are documenting the unfolding changes. Perhaps it’s giving people something to look forward to that we haven’t had in so many months.

The bright  blue  spot in the middle of our city that you can see for quite some distance.

On Saturday after doing some grocery shopping, I made it a point to go down to the area where it is and take a few photos. 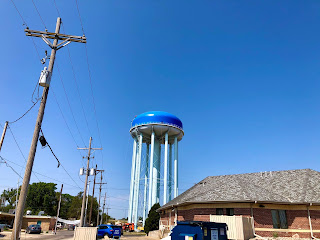 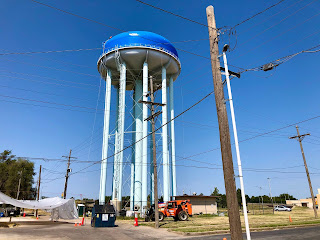 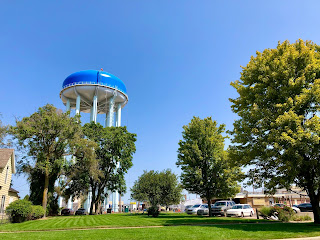 Jerry helped me get this next photo I wanted while we crossed the overpass that goes from Hutch to South Hutch on the west side of the water tower. (Because I’m not stupid, you know . . . I refuse to talk on my cellphone let alone take photos while driving.) He sat in the back seat and took the photo from my open window because the backseat window won’t open anymore. Good job, Jerry! 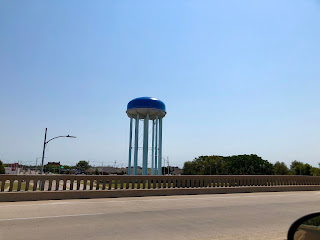 There is a YouTube video by Nick Hemphill that shows the painting of the water tower so far. Link → Painting the Hutchinson water tower. Fun fact: At several points in the video (such as the 1:25-1:28 minute mark), you can see three tall buildings in the background. The closest is the First National Bank building, and behind it is the Wiley Plaza apartment building. And behind that you can just make out another apartment building, Plaza Towers, where I lived in a west-facing apartment on the ninth floor from August 2014 to March 2018 (when I found our current handicap accessible apartment to bring Jerry back home from the nursing facility). I took at least two, many times more, sunset photos from that livingroom window. That’s 1,306 days. Lots of photos. I’m slowly going through them and will be printing the best for a scrapbook.

I know what the end design result of the water tower is supposed to be, but I’ll wait to show you the real thing when it’s done.

Lastly, just an interesting photo of the water towers in Pratt, Kansas. Many cities around the country have done their water towers this way. Kinda cool. 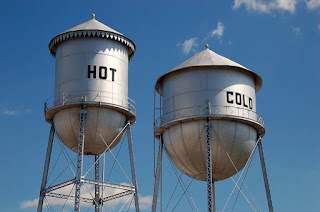 Everyone be safe and have a blessed week!

0 thoughts on “The water tower”