Skip to content
Sorry I haven’t been here for a few days. Busy lately with various things.

You may remember that Elissa’s cat, Drac, was very sick with feline pancreatitis back in July. He spent a couple days at the vet while being tested, monitored, and given meds. He’s doing sooooooo much better nowadays.

While he was there, the staff gave Drac wet cat food (he’s used to dry) that apparently he scrarfed down.
Last weekend, they decided to buy a couple cans of that cat food just to see how he would take to it at home. This past Monday evening, Elissa opened a can, put it in Drac’s food bowl, and it disappeared within a couple minutes. She said he ate it like it was crack lol. 😆
On Tuesday, I needed to do some laundry, so Jerry and I went to their house. While the laundry was going, I spent some time outdoors doing some garden cleanup. A little before noon, I came in for a break, washed my hands, and got something to drink.
As I turned around, Drac came through . . . and began puking all over the carpet where Nova and Aero play. 🤦‍♀️
At that time, I didn’t know Elissa had given him new food. I texted John and told him Drac was being sick all over the place. He asked how many, I said five in one minute. While he was sending that message on to Elissa, Drac got sick again.
Geesh. 😐
Then, Elissa texted asking what it looked like (I’ll save you from that one lol). We determined it had to be the canned wet food.
I told her maybe next time just give Drac a spoonful or two at a time until his tummy gets used to it and see how he does. She agreed. I cleaned the carpet.
Drac disappeared to the basement for a while. I switched laundry loads, then went back outdoors to do a little more in the garden. It was getting hot, so I was only out for half an hour. I came in, washed my hands, and turned around . . . 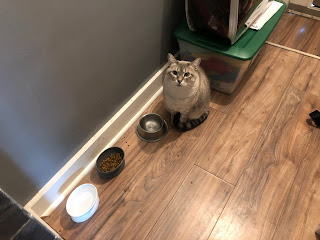 Drac was sitting by the food bowl that had held the canned food and just staring at me like, “I want more.” I took that photo and texted it to John and Elissa.

They laughed and John said to just pick up the bowl. I did, washed it and set it aside. I worked in their kitchen cleaning a few dishes and working on laundry. About 20 minutes later I turned back around and saw this . . . 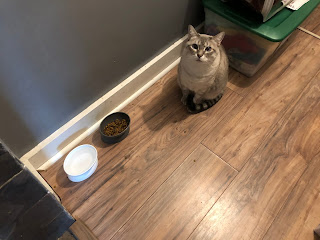 I kid you not, he hadn’t moved! 😂 He really wanted that food lol. I sent that photo on to the kids and we all had a good laugh.

Drac then proceeded to follow me around closely for the next hour while I continued working on laundry and other things. When I would stop, he would sit and stare at me. When I moved, he followed along. Etc. etc. I finished everything an hour later and we left. 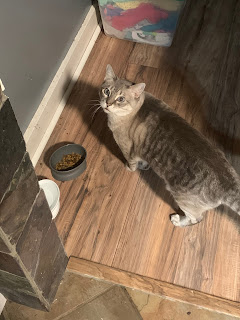 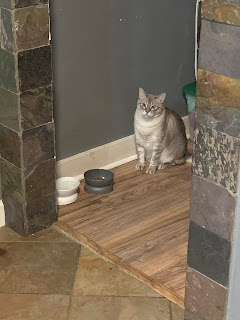 She’d just gotten home from work, Drac met her at the door, meowed loudly at her and went to sit in his spot . . .

She fed him just a bit at a time.

I guess when the cat insists, you give him what he wants. 🙃 😹

Have a blessed and safe weekend!

0 thoughts on “When the cat insists”