Of all things, we have the windows wide open today. After being in the 20s and 30s the past several days with freezing rain, ice storms, and some snow, it’s currently a balmy 75° with lots of sunshine right now.

Ha! That’s Kansas for ya. If you don’t like the weather of the moment, just wait a couple minutes, it’ll change. 😄

While sitting here working on this post, I heard one of the grain trucks start to pull out of the seed company across the road from us. I absentmindedly looked up and watched. His truck putt-putt-putted and suddenly he stopped in the middle of the road . . . He ran out of gas! 🤦🏻‍♀️ Always make sure your grain truck has plenty of gas to get you to the company and back to the farm.

I forgot to post the photo of the water tower when it was finished being redesigned. Jerry took this photo with my phone as we drove by a couple weeks ago. A dark blue with the word Hutchinson, the “o” replaced by a sunburst. The company also applied new protective coatings on the underside and the ten legs. 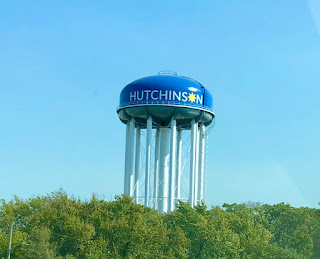 It’s the brightest and most colorful landmark that we see from our apartment windows now, and really stands out against the sky, regardless if it’s sunny or cloudy. It looked pretty neat in the fog the other day.

John and Elissa brought Nova and Aero by last night for their Halloween treats. They decided to just go around to all the family/friend’s homes and avoid actual Halloween day. Nova was “Jessie” and Aero was “Woody” from “Toy Story.” 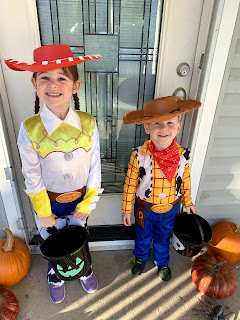 Did I mention that John got himself a new vehicle? He still has his white and black 1998 Camaro . . .

However, he needed a vehicle that he could put child safety seats in so he and Elissa didn’t have to always be exchanging his Camaro for her Durango just so he could pick up the kids after daycare . . . every. single. day. She hardly ever gets off work from the post office before daycare closes at 5:30 p.m. John is off work at 4:30, so he had to take care of switching cars and then getting the kids.

On September 22, he found what he wanted: a pearlized white 2011 Suburban. 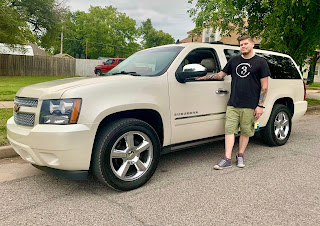 Lots of bells and whistles. John leaves for work before the sun is up, and he said when he remote-started the car from the doorway of their house the first time, the whole vehicle lit up all over in places he didn’t even know had lights! He’d had no idea it did that! Very cool.

John immediately ordered new child safety seats for his car, which arrived the very next day. I went over and helped him install them. Wow, I had no idea how much work that is nowadays to get them in there just right. John says once you get them set up the first time, they’re easy after that if you have to take them out for anything and put them back in later (like when he puts Aero’s seat in my car for while they’re out of town each July or other times for a few days).

I cleaned out the boxes the child seats came in, put the packing foam and other cardboard inserts in the recycle bin in back of their house and set aside the two huge boxes. Guess who found them the next day when I was babysitting him and working in the garden? 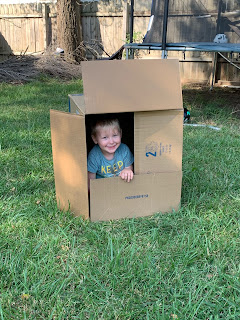 John’s half-brother, Christopher (my ex and his wife’s son together) and his fiancé, Taelyn, just had their first baby yesterday, a boy named Cayson. He was born by cesarean a week early because he was actually due November 5 . . . which is my oldest son, Jeff’s, death date (2013) . . . understandable they wanted to avoid the association with that. Bad enough John’s birthday is November 6. Anyway, here is a photo of that sweet new baby . . . 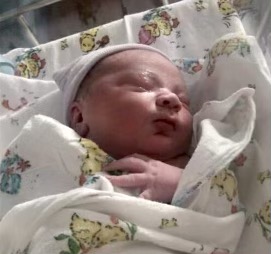 Just before I was finishing up this post, John called and told me the hospital here had flown the baby to one of the hospitals in Wichita because he needed a specialized test for a problem with his blood pressure or something along that line (no one here has the equipment to do that apparently). Please keep their little family in prayer about this.

Also, John is having an extremely hard time right now as we come up on Jeff’s death date next Thursday. He was feet away and witnessed the accident at work that killed Jeff. It never gets easier. I just keep praying he will get back to the therapist who does the EMDR and receive more treatment and therapy for his PTSD. Please keep our family in prayer over the next few days. It’s been affecting me more so this year for some reason.

And somehow I didn’t realize that part of my depression several days ago was right around my mama’s death date, which was October 23, 1971 (I was 14 years old when she died of cancer).

Sometimes there’s just too much, ya know?

Everyone be blessed and stay well!

0 thoughts on “Miscellaneous and prayer requests”